Apple’s uber-popular iPad is going to be making its way into the back of dozens of taxis in a pilot program that will offer riders a range of credit card perks, increased trip monitoring and eventually, officials say, the ability to play games like Angry Birds.

The move to use the tablet computers, instead of Taxi TVs, is music to the ears of many drivers who have long-complained about the blaring screens that can be found in cabs around the city — the new devices will not have the video programming and ads that have irked many in recent years.

“There’s nothing more pleasant than to have a quiet ride,” said driver Victor Salazar, of the Bronx. “In a city that’s so noisy, a quiet ride is essential.”

The Taxi and Limousine Commission’s pilot program, announced Thursday, would outfit 30 yellow cabs with iPads and the application Square, a credit card payment system popular with t-shirt vendors, hip cafes and other small businesses across the country. 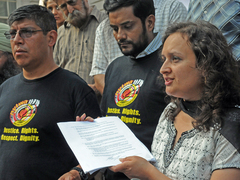 Officials are currently looking for owner-drivers to participate in the program.

In its yellow cab incarnation, the $350 Square package would include an iPad encased in a protective covering that is bolted to the back of the front seat, as well as a dashboard mounted iPhone allowing passengers to communicate with drivers.

Officials said that drivers involved in the pilot program will be exempted from rules that forbid them from using cellphones.

Riders will be able to swipe their credit cards at any time during the ride, all while following their trip on an interactive map. They can also opt to receive a receipt by text or email.

Eventually, the hope is that riders will be able to surf the internet, use apps and play games.

In addition to the Square pilot program, the TLC will be test-driving new systems from its current vendors. The details about those programs were not immediately clear.

But Square seems to have the advantage over the competing programs, and could even see its custom-designed taxi system deployed throughout the boroughs as the TLC moves aggressively to implement a program that would license livery cabs to accept street hails in Brooklyn, Queens, the Bronx and Staten Island, as well as parts of Upper Manhattan, Commission Chairman David Yassky announced.

The Taxi Workers Alliance threw its weight behind Square, which founder Bhairavi Desai said will help break what she called a “monopoly” on credit card payments.

It could well be the first time the Alliance has voiced support for a credit card program, after fighting tooth and nail against credit card readers when they were first mandated in 2008.

“We see this as a real step forward,” Desai said. “With Square, drivers get their money directly.”

Square prompts users to sign electronically for every transaction, which drivers said would help eliminate disputed charges.  Currently, they have problems disputing charges because passengers do not have to sign their names.

Not everyone was pleased.

Both CMT and VeriFone, the only approved vendors currently supplying credit card systems to New York City’s yellow cabs, expressed reservations about the new program, as well as plans to further open the market when their contract with the TLC expires in 2013.

“It was sprung on us at the eleventh hour,” CMT President Jesse Davis said of the plan. He said he was concerned about Square ability to process transactions securely, or to provide customer service on such a massive scale.

Though commissioners said they were satisfied that Square met security standards, some voiced concerns about driver safety.

“My only concern with the taxis is the safety of the drivers,” said Commissioner Nora Marino. “The iPad is an incredibly hot item. Driver’s have gotten shot for a lot less than an iPad.”