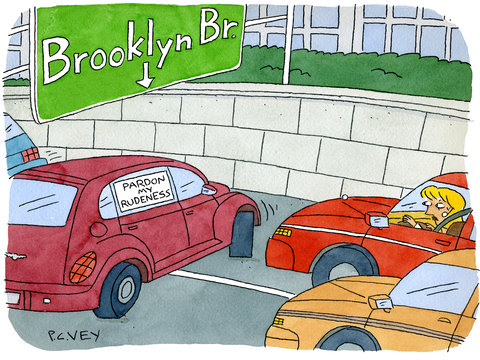 I am waiting, more or less patiently, in the right lane of the southbound Franklin D. Roosevelt Drive, crawling toward the exit for the Brooklyn Bridge. A maroonish blur zooms by on my left, and I take a deep breath, already guessing what I’ll see: the car, at the last possible minute, slows down and nudges into the line, right up by the exit.

Suddenly, the stentorian voice of James Earl Jones booms from a megaphone affixed to my car: “I saw what you did, driver of the burgundy PT Cruiser. You should be ashamed of yourself. You cut in front of this line of decent citizens, waiting their turn. Who do you think you are?”

The driver, shamed by this persuasive public dressing-down, pulls over and gets out to apologize to every driver inching by. Then he throws his license into the East River and vows to take public transportation for the rest of his life.

O.K. The previous two paragraphs are a fantasy. It’s one of many that I’ve dreamed up, and if it sounds elaborate, that’s because I have so much time to refine the details when I’m stuck in long lines of traffic that never seem to get shorter because so many obnoxious drivers are barging in up at the front. I don’t think of myself as an angry person, but my fantasies in these situations tend to involve paintball guns, battering rams and a giant trained eagle that can pick up your car, Mr. Acura-driver-scooting-down-the-breakdown-lane, and drop you on Rikers Island.

The line-cutter is the most enraging species of self-entitled driver, with those using the breakdown lane representing an even more despicable subspecies. These impatient hooligans seem to be convinced that lines are for chumps, that they are too important to be inconvenienced by basic concepts of fairness like “waiting your turn.” I resent people who think nothing of avoiding irritation for themselves by making it worse for others. Their behavior demonstrates a sense of entitlement and egotism that makes my blood boil.

I’ve shared these sentiments with friends and acquaintances, and at times I’ve been aghast to realize that some people I like — seemingly kind, reasonable people — are unapologetic cutters. Their argument is always the same: They are skillful drivers who zip along and dive into the line only when they spot an opening. This maneuver, they argue, is nimble and elegant and does not constitute cutting.

Oh really? If you honestly believe that logic, then I invite you to try this experiment: Walk into a crowded Starbucks, survey the line, then sidle into a gap right by the register. Would you be embarrassed? Would you be afraid that the line would transform into an angry mob and pummel you?

The only difference between cutting a line of people and cutting a line of cars is that in your car, you hide behind a scrim of anonymity. Your behavior is still selfish and indefensible, but because your fellow drivers are all strapped inside large, rolling metal boxes, it is logistically difficult for them to shame you into behaving like a civilized human being.